Community Bank is celebrating its centennial anniversary, an exceptional accomplishment in our corner of the Commonwealth--or anywhere.

This significant milestone is truly an anniversary, rather than a birthday; we're able to celebrate 100 years of service as a locally-owned and operated financial institution because of the loyalty we and our community partners have shown each other.  Like all marriages, it has required hard work, trust, open communications, and a commitment to our original pledge.

I invite you to join our celebration of 100 successful years of mutual prosperity.  This virtual tour chronicles the last 100 years of your Community Bank's history.  It is dedicated to the visionary pioneers of yesteryear and all those responsible for our continuing success.

These are exciting times.  We look with optimism to the 21st century and are grateful for the opportunity to serve our hometowns.

We are friends, your neighbors, your partners in progress.  We are your Community Bank.  Thank you for your vote of confidence.

Congress amended the National Bank Act to permit national banks to be formed in small towns with $25,000 in capital, rather than the previous minimum of $50,000.  A group of local men saw opportunity and met at the Hartley Inn to organize The First National Bank of Carmichaels, with capital stock of $25,000 from 41 original stockholders. 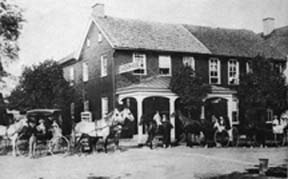 John Dowlin, a bank officer, rode a buck-board to the Farmers and Drovers Bank in Waynesburg on July 1, 1901, to pick up cash for the Carmichaels bank's opening day.  He was reimbursed 50 cents for the trip to purchase horsefeed and his dinner.

Richard L. Baily, son of a bank founder (J. Ewing Baily) was employed by The First National Bank of Carmichaels as a teller in 1913 and eventually became president and chairman of the board.  He served the bank for 71 years.

The bank operated in the corner room of the N. H. Biddle House.  In 1911, the bank awarded a contract to Travis and Kimball of Waynesburg for the construction of "a new two-story fire-proof building at the corner of George and Market streets" which it occupied on April 1, 1912.  The bank has been extensively renovated twice in the last century.  It has also served as home for the town library and a barbershop.

In 1924, Frank Mitchener (FNB of Carmichaels' first president) died and was succeeded by L.T. Laidley.  Then in 1926, First National Bank of Carmichaels celebrated its silver anniversary with assets at $979,244.79.

"We have endeavored to render a character of service adapted to every requirement of our community, and to treat the public in such a way that we may properly regard those who do business with us as our friends, as well as our customers."

In 1930, FNB of Carmichaels recorded assets at $1,153,217.  Greene County population rose 35.6 percent from 1920, due to an influx of coal miners.  Then in 1931, the Great Depression hits.  Five surviving Greene County banks' total assets fell to $7.8 million.  "This well-managed and stable bank...could not escape the effects of the Great Depression."  FNB of Carmichaels reported a drop in assets to $763,696.  Bank mergers and failures elsewhere in the county did not threaten FNB of Carmichaels.  In response to the nationwide run on banks, FDR declared a bank holiday period, thereby closing or restricting nearly every bank in the U.S.

"Everyone was waiting around for the telegram from the government to authorize the bank to reopen.  According to dad [Richard Baily, former bank president], this bank was closed the shortest time of all the banks east of the Mississippi.  The crowd cheered when the doors swung open again.  There were no runs on this bank, and it really wasn't necessary for us to close for the bank holiday."

Washington County women sold $1 million in war bonds and stamps in a six-month period.  Elsewhere in 1942, the Washington County Courthouse cannon was scrapped for salvage for the war effort, and county native Edward Martin was elected governor of Pennsylvania.

In 1945, the Carmichaels Public Library opened in the basement of the First National Bank of Carmichaels, where it maintained its home until 1959, when it moved to East George Street.

"In the fifty year interval since this bank was organized, there have been social, political, and economic upheavals which have changed the very character of our civilization.  But through it all, the development of this bank has gone faithfully on.  This is a community bank.  We have made many good friends who have been loyal to us, and recollections of their kindness and cooperation fill our anniversary thoughts."

--Written in 1951, this 50-year-old passage from FNB of Carmichaels' commemorative anniversary book could have been written today, as neither history nor human nature have changed.  In 1951, the bank posted assets at $4,685,132.80.  The board of directors included Karl M. Baily, Richard L. Baily, Gilmore F. Bell, Frank G. Huston, L.T. Laidley, and W.C. Montgomery.

On December 1, 1961 FNB of Carmichaels was held up by four armed, liquor-laden robbers who made off with $8,000.  Thankfully, no one was hurt.  PA State Police hunted them down with help of a Social Security card one of the robbers dropped in an alley beside the bank.

In 1962, President John F. Kennedy delivered an address on the steps of the Washington County Court House.  That same year, former Canonsburg band leader Bobby Vinton's first record, "Roses are Red," sent him to the top of the music charts.  Then in 1964, FNB of Carmichaels opened its first branch, located in Greensboro.  The Beatles debuted in America.  A copy of Lookmagazine cost 25 cents.

In the mid-1970s FNB of Carmichaels began to offer computerized bank accounts and transactions, ending manual calculations.  Customers began to receive computer-generated statements.  Congress enacted the Equal Credit Opportunity Act to avert possible discrimination in providing bank services to people because of their age, sex, national origin, religious affiliation, or because they were recipients of public welfare.

In 1980, FNB of Carmichaels opened its first Waynesburg office on High Street in July.  It also posted assets at $39,826,000.  Further away in Washington State, Mount St. Helens Erupted.

Money access cards (MAC) were issued to customers for use with the new "Money Mine" system, named by bank employee contest winner, Marie Currier.  The following year, the bank added personal lines of credit to its product mix.  FNB's Greene Plaza office opened in July 1983.  The Pioneer branch was to follow in 1986.

In 1987, after considerable deliberation and market research, the First National Bank of Carmichaels changed its name to Community Bank, National Association to reflect its expanding role as the "community bank of choice" for superior customer service in Greene and Washington counties.

Local ownership and decision-making have never changed, however.  Also in 1987, the bank opened its Washington office in the high-traffic Millcraft Center building at 90 W. Chestnut Street.

The closing decade of the 20th century will undoubtedly be remembered for its bounty of digital gadgets and gizmos that enlarge our communications capabilities by miniaturizing our world.  The information explosion has been fueled by a new breed of digital entrepreneurs-turned-overnight-millionaires and unprecedented investment in technology stocks.  The Internet has transformed the way we send and receive information.

Meanwhile, Community Bank continued its century-long tradition of unsurpassed personal service.  While the balance between high-tech and high-touch is treated as a "trend" by many larger, out-of-town institutions, Community Bank has never waivered from its "customer-comes-first" pledge.  Your Community Bank uses technology as a tool to enhance, not replace, customer service.

Toward the end of the century, there was a sharp rise in the sale of stocks, bonds, mutual funds, and other equity securities by banks, either directly or through subsidiaries.  Although the "big-board" hit all-time highs, investors' enthusiasm was tempered in 2000 by three Fed rate hikes and a sharp economic slowdown.

Y2K turned without a hitch for Community Bank; customer confidence reached an all-time high.  The bank's Washington Mall office opened in March, and the new Southpointe office opened in November.  In 2000, Community Bank posted year-end assets at $220,183,379, a monumental leap from its origins 100 years ago.

The early years of the 21st century have brought no shortage of tragedy and excitement. As a nation, we remained strong and unified through September 11th, not losing sight of our core values. And through the economic crisis of 2008, we have been a people forging ahead. Increasingly, the advent of the internet has moved into our lives as many retailers continue to ride the wave and reinvent online business.

In the midst of the 21st century economic and technological whirlwind, Community Bank has remained a corner stone in our communities and the banking industry. With the increased usage of electronic payment and credit methods utilized by consumers on the internet and elsewhere, Community Bank established a game-changing deposit account: Cash Cow Checking. In keeping with many Americans “going green,” one of the highlighted feature benefits of Cash Cow Checking is our own “Going Green” initiative requiring an e’Statement through Internet Banking.

2003 saw a Texas based company begin drilling into a vast natural gas reservoir below most of Pennsylvania. In the following years, the Marcellus Shale became more nationally known and universally important. By 2008, major energy and drilling industry companies began developing the Marcellus shale and establishing corporate offices in Southwestern Pennsylvania, thus earning Washington County the title “The Energy Capital of the East.” In 2008, Community Bank launched the Tri County Oil & Gas Expo, bringing local residents together with businesses involved in the Marcellus development industry. Since then, the Oil & Gas Expo has grown to include thousands of participants over several expos, including a Job Expo, a Business to Business Expo, and a Safety and Education Summit.

While keeping our finger on the pulse of current trends and events in our industry and national economy, Community Bank has remained steadfast in our commitment to our neighbors by providing award-winning customer service and products that remain competitive and fair. Over the last 10 years, Community Bank watched its stock rise from under $13 per share to hovering at $19 per share. 2010 has been Community Bank’s most successful year to date, with reported total assets of $497,260,352 – more than double Community Bank’s assets in 2000.